Inside the Music Mind of Bassist Child Prodigy: Aron Hodek

For the 11 year old bass guitar prodigy Aron Hodek, music is more than a feature of life, it is life itself. Aron just upgraded from a 4string to a 5string bass. Growing up in a family of musicians, artists and music lovers, Aron has been surrounded and enamored with music since the day he was born. For some people, being surrounded by music will turn you into someone that loves music but doesn’t mean you will definitely have the drive to become a musician. For Aron, not only did he want to become a musician, but his love for music has pushed him to become one of the best musicians in the world and at 11 years of age, that is quite the statement.

While some young musicians get lifted up just because they are young, for Aron, there is an uncanny ability to play the bass guitar with the feel and expression of a musician that has been playing for decades. Hodek is known for playing electric bass rather than  acoustic bass.

Typically when interviewing a musician as young as Aron, we would consider simplifying the questions. I mean come on, how much life experience and insight can someone have at 11 years old?!! With Aron, you will see that not only his music, but his overall personality are developed well beyond their years. To any other children inspired by Aron and that like acoustic guitars, a child-friendly guitar with great tone is featured in our Martin LXM review.

AH: Both my brother and my grandpa are musicians. My mom is a dance teacher and my dad used to collect records so basically when I was born, music was all around the house. 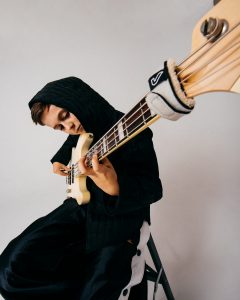 AH: First of all I think the groove is my number one priority I’m seeking in other players. The feel is just as important and they are closely connected. Technique is also very important to be able to play what you hear in your head. I also think the ability to musically hear well is very imporant, just as having good choices of what to play and what not to play, I guest that’s taste. All of the above doesn’t mean much without being a good person, that people like to work with.

AH: I would say Jaco Pastorius is one of my very first and main inspirations as a bassist. I would suggest listening to his first album called Jaco Pastorius and also the Weather Report album called Heavy Weather. Chris Daddy Dave is also a big inspiration for me, since I got to hear him live and even join him on stage for a song. He has a very unique sound that inspires my music a lot. I both like his own projects and the ones where he’s a sideman for instance with D’angelo, Robert Glasper, Erykah Badu.. I really enjoy listening to jazz as well, John Coltrane is one of my favorites to listen to. I don’t have a favorite album but currently my favorite tune is Love Thy Neighbor on the Stardust album. I have so many other inspirations, the list would never stop.

AH: It depends on the genre a lot, but every song needs a good melody and a groove that make you feel something. Good music production plays a big role as well. If it’s a song where you have a singer or a rapper the lyrics and delivery is very important.

AH: Good music, musicianship with good production is key. The artworks and all the extras play a role as well but good music is the most important element of a great album.

AH: The very first album I could remember that I knew of was D’angelo’s Voodoo. I think I was 4 years old when I fell in love with it. I don’t remember exactly what it was that grabbed me but all the songs were so groovy. I thought It was so cool and it made me want to grab my brother’s bass to act like I was playing along to it.

AH: I had so many amazing experiences playing with my idols but one time Robert Glasper called me on stage to play with him, Chris Dave and Isaiah Sharkey joined on guitar. One of my idols Derrick Hodge was playing bass and he handed me his huge 5 string bass. I was so shocked that I even forgot that I couldn’t play 5 strings back then so I just started playing whatever I felt was right. It was epic. I remember DJ Quick and Lalah Hathaway were also in the club that night.

MM: WHERE DO YOU SEE THE MUSIC INDUSTRY IN THE 30 YEARS?

AH: I honestly don’t know but I just hope we are going to be heading towards more musical ways of expressing what we feel. For instance I mean harmonically the chord progressions today became so simple compared to the days of the Stevie’s, Earth Wind and Fire’s and so on, that there is no room to be more simple anymore so I think it’s going to change in that direction. In 30 years we might play gigs on Mars haha.

AH: Always listen to fresh music even if you don’t like it at first. Don’t get satisfied by being great at something. Learn something that you’re not good at or just keep changing your style.

AH: Listening to better players than you are. Always try to keep pushing yourself to be better. There is no cheat code or shortcut I think. Always being around music, when you play a video game, or do something else. Mainly just HAVE FUN with it.

AH: So I’m currently playing a 4 string Fender Squier from the 80’s but I’m getting my signature 5 string Elegee Custom bass next week so I’m very excited. Also playing a Markbass JP series 4 string bass. I use Markbass amps, maily my 102-500 Ninja Combo. I play several different DR Strings. I enjoy experimenting so I always change between different models. I also work on my pedal board where I got my secret sauce including the Whammy guitar pedal by Digitech, the Flashback Delay by TC Electonics, the Raw series Octave pedal by Markbass and a Freeze pedal by Electro-Harmonix. I carry my basses in GruvGear cases and I also use their fretwraps for extra swag. I really love all my custom LK straps since they are very comfortable and fit my size and style. Last but not least I use a Lyngdorf set of speakers and an amp for mixing and listening purposes. I highly recommend to check out their products. My dad is a huge audio fan and he found out about this company. We connected, and ever since we tested their set I love their sound and clarity. Other than that I just love rocking Jordan sneakers haha.

AH: Since I haven’t played in that many venues I can’t choose a favorite place but wherever there is good atmosphere, musicians and good vibes, that’s where I like to play.

AH: I can’t think of one. I honestly eat to survive but I like any places where they got good pancakes. I like sweets!

AH: This is even a harder question. I really don’t remember any hotel names. Wherever they have nice rooms.

The 11 year old bass player phenom Áron Hodek from Slovakia, better known as AronTheBassist, is one of the most talented bass players the world has ever seen. Growing up in a music driven family gave him a great opportunity to develop his passion early on. His DIY YouTube videos, TikTok, and Instagram directed at his 500k Instagram followers are his platforms to inspire and encourage people to never give up on their dreams. The legendary producer Quincy Jones acknowledged his amazing talent, but also musicians like Common, Timbaland, DJ Battlecat, Larrance Dopson, Robert Glasper, D’angelo among other industry icons now follow his talent. From Zara to GAP Aron has collaborated with several top brands and music industry leaders to showcase his talent to the world. Since 2018 he’s been also producing music under the nickname of AronTheProducer.